“I intend to enjoy myself,” Hudgens said at a retirement ceremony in his honor at Murfreesboro Police Headquarters Thursday afternoon before a standing room only crowd.

Major Hudgens begin his employment with the department as a uniformed patrol officer on August 6, 1984. Six years later, he was promoted to Sergeant and then Lieutenant in 1996. Hudgens was a member of the Special Operations Unit for twenty years, during which time, he became Captain and was later promoted to Major.

Hudgens has many Commendations to his credit. He was named Officer of the Month in May 1984 after only one year on the force. The Exchange Club named him Officer of the Year in January 1986. In 1992, Hudgens received the Crime Stoppers Public Service Award. He was honored as Tennessee Law Enforcement Officer’s Association (T.L.E.O.A.) Officer of the Year in 1992. Hudgens was also a part of the Tennessee Public Safety Network and played a significant role in critical incident stress debriefings.

He received a Letter of Recognition from the Chattanooga Police Chief for his assistance with debriefings after the July 2015 Terrorist attack on the Navy Operational Support Center in Chattanooga.

Hudgens also received special thanks from Chief Justice of the Tennessee Supreme Court Gary Wade for his time and effort spent in ensuring the safety of the Court and participants at the Supreme Court Advancing Legal Education for Students Program or S.C.A.L.E.S. in Murfreesboro in October 2013. This program played a vital part in the Court’s effort to promote a better understanding of the judicial branch of government and the central role it serves in our society and our State.

“I know in a lot of ways I turned to David in my career,” said Murfreesboro Police Chief Michael Bowen. “When there were tough decisions to be made, when there some things to be looked at and analyzed, I knew I could be confident in going to David and getting good advice and getting good counsel.”

Hudgens said he looks forward to spending more time with his family and especially his grandson. “I think I’m going to get into the grandpa business,” he said referring to a story told at former President George W. Bush’s funeral.

The veteran law enforcement officer thanked the dozens of former co-workers and friends in attendance.

“I want to make this your ceremony as well as mine,” Hudgens said. “I appreciate all of your kind words. In addition, to thanking all you, I want to thank these folks up here. My wife, my daughter, my son, they sacrificed along with me, so I can do this job for 35 years. A lot of missed suppers, holidays, birthday, Christmas mornings – had to wait until I get home for Santa to make it.”

“Murfreesboro is a better place, a safer place, and a much more comfortable living place because David Hudgens chose to come here 34-plus years ago and devote his life to service of the people of the city of Murfreesboro,” said former Police Chief Glen Chrisman.

Hudgens received a Bachelor of Science degree in Criminal Justice from Middle Tennessee State University in December 1988. He is also a 2008 graduate of Northwestern University School of Police Staff and Command. 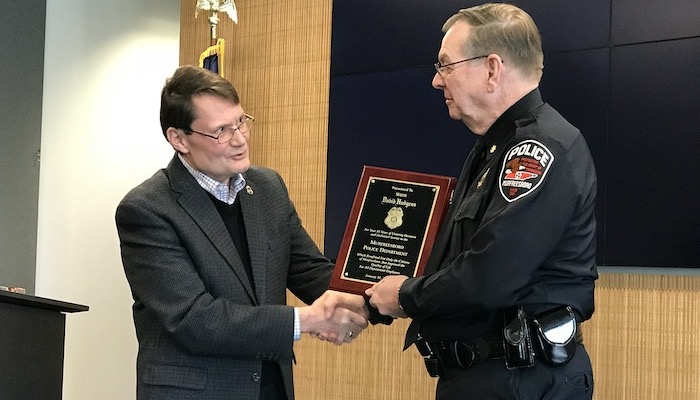 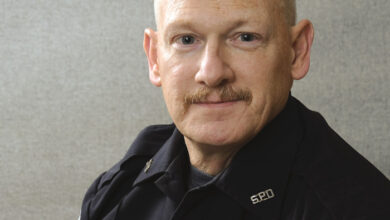 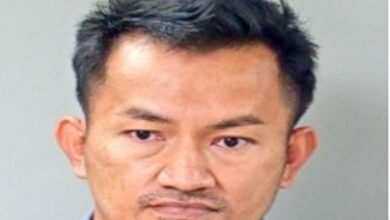 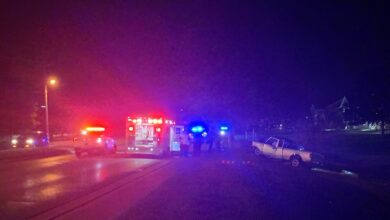